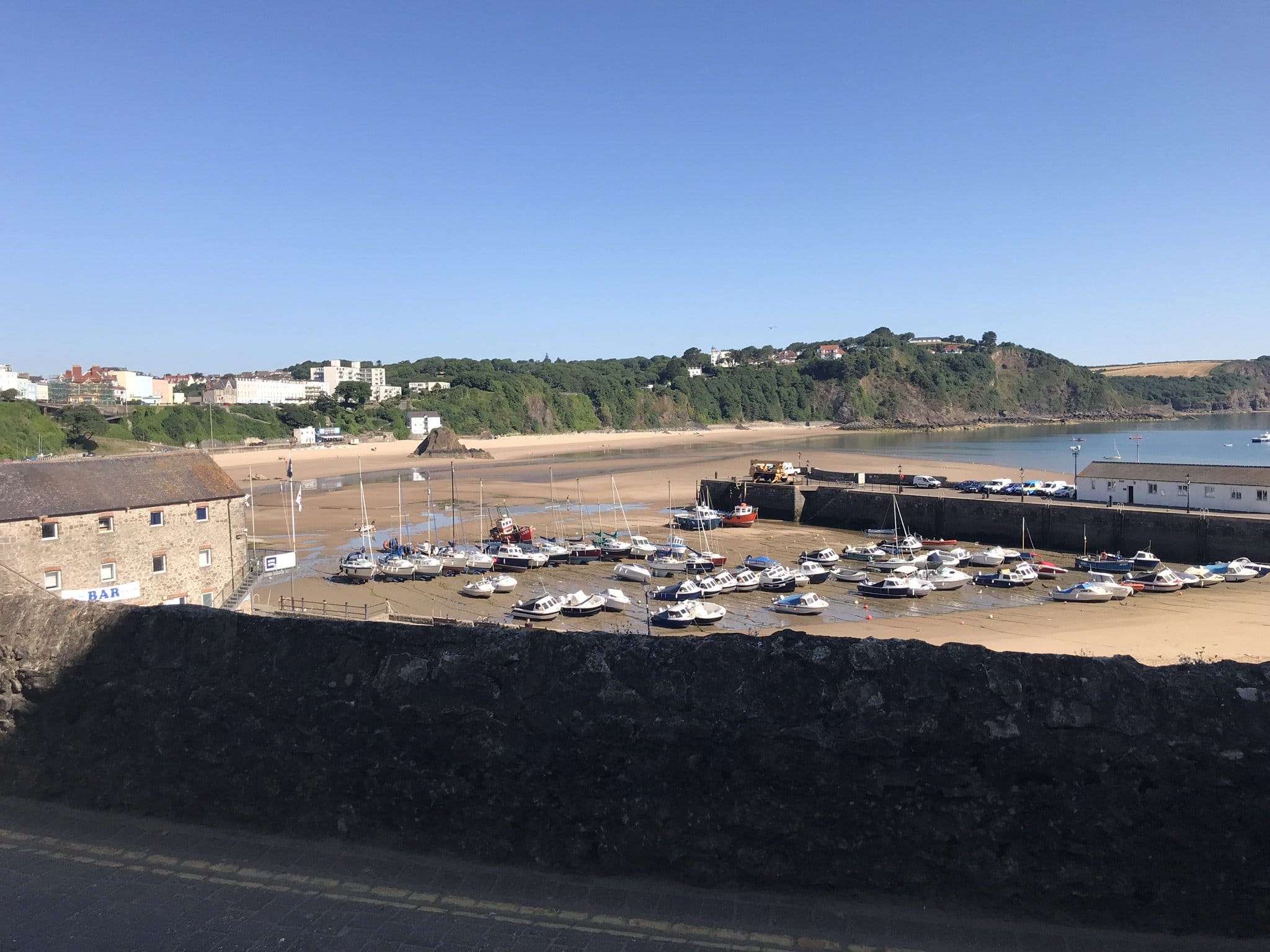 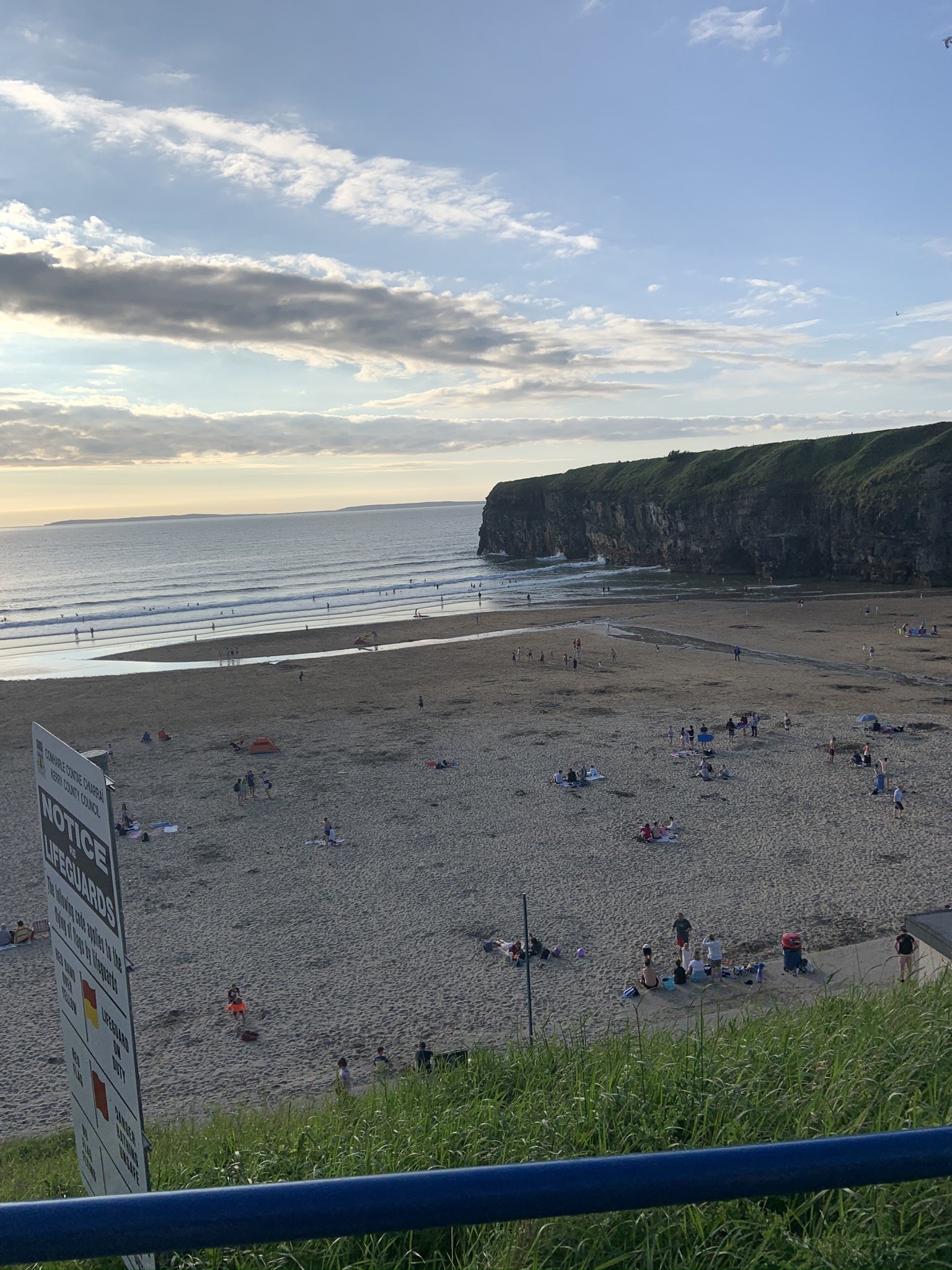 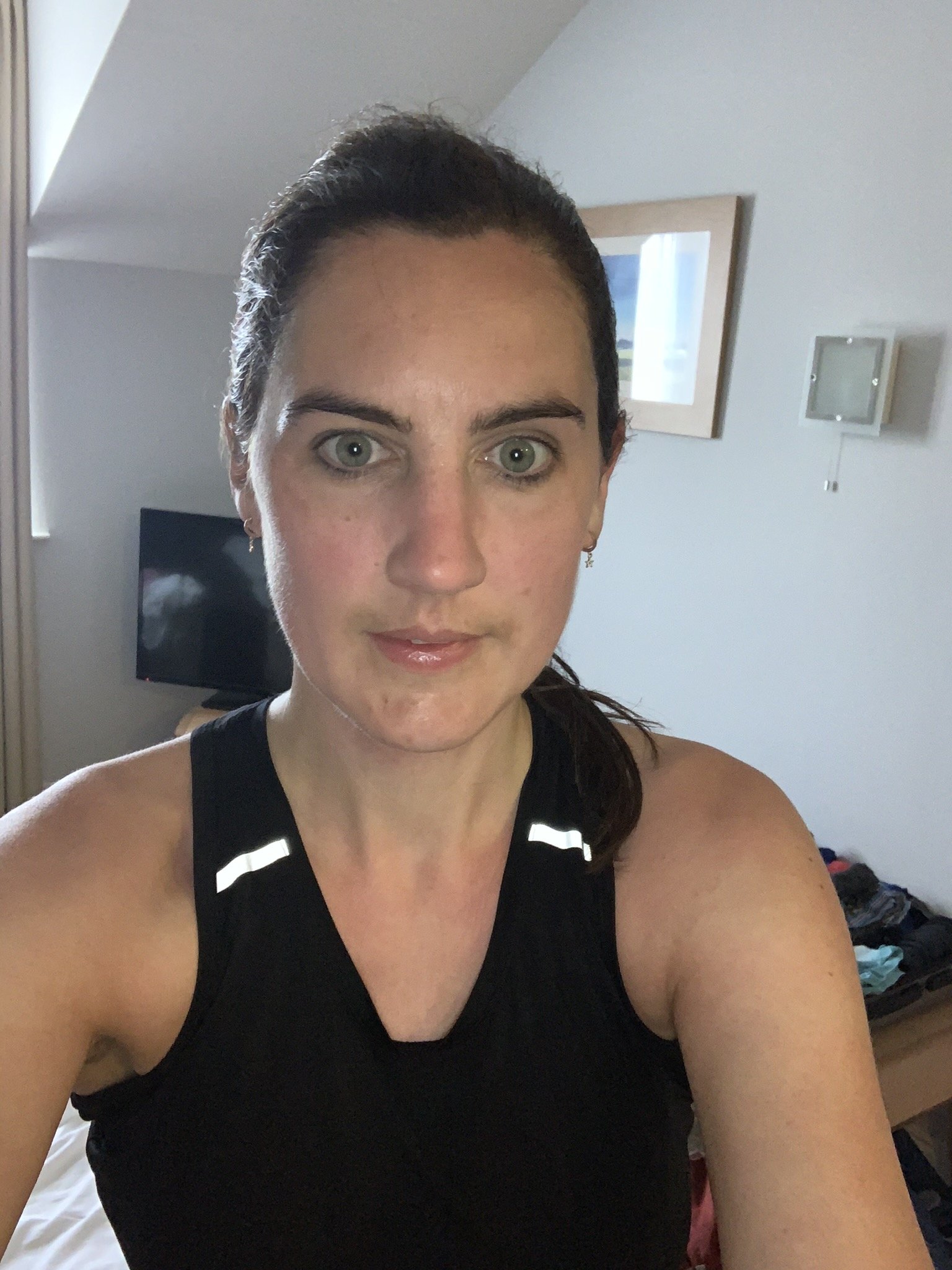 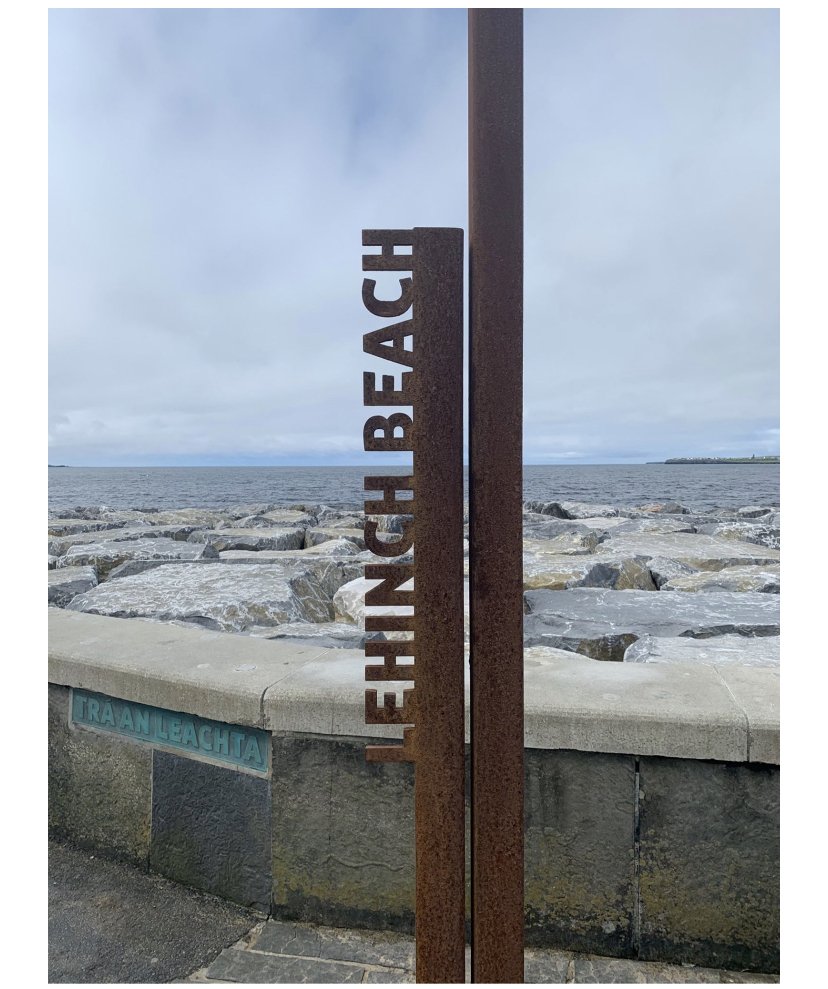 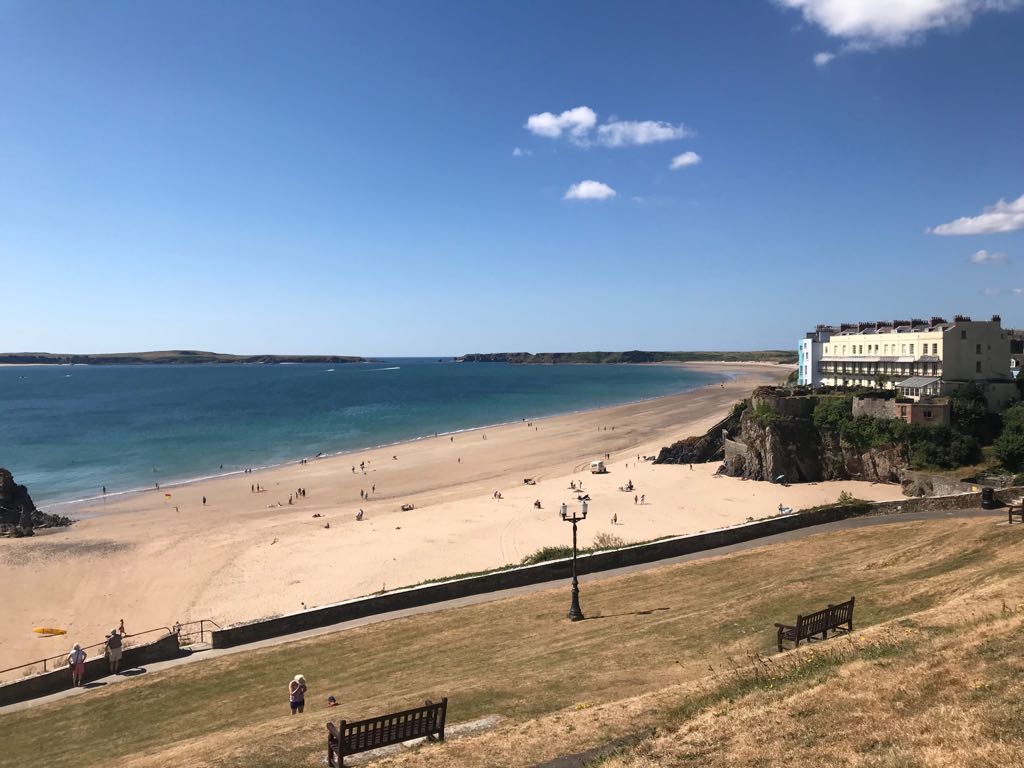 Over the past two years, I have become, if not obsessed, then very drawn to the idea of sea swimming. But not exactly swimming, more just going into the ocean and messing around and enjoying being in the sea. I’m not looking to swim loads of lengths or do a triathlon any time soon! My interest is very focused on this urge I have to be in the sea. I sometimes do a few small bits of actual swimming when in the sea, my technique is far from perfect, but I try. But what is really drawing me to the water is just that I want to be in the ocean because I love the feeling that it brings during and after the swim. Do I sound mad?

This urge started two years ago in Wales. I alluded to this in my recent blog about our family holiday in Clare and the Aran Islands. We went on holidays two years ago to London and Tenby in Wales. We got the ferry from Rosslare, drove to London, did Legoland, Harry Potter studios, Arsenal Stadium tour, spent time with family over there and then drove back to Wales, Tenby to be precise, where we spent 5 days in the most charming Airbnb, overlooking the beach. This was all during “the great heatwave of June/July 2018” and it was scorching. We had been in London city for a week at this stage, and it was brilliant, but to be by the sea in the heat, at the end of the holiday was absolutely what we needed. It was so hot that all we really did was spend our days at the beach and eat in lovely bars and restaurants in the evening. It was perfect. Tenby is charming.

We were lucky of course to be there in such fantastic weather. This was my first holiday where I didn’t take a break from exercise. I didn’t go overboard, but I stuck close enough to my usual running routine. And in Tenby, those runs were on the beach. Even early in the morning, it was so hot. All I could think of on my first morning run there was how inviting the sea looking and how I just wanted to jump into it. As I ran, the thought dawned on me, Emma you can jump into it. You are in running shorts and a vest top, you can just take off your runners and in you go. Our airbnb house was literally a few steps away from the beach so I knew I could walk back barefoot or worst case scenario put my wet feet into my runners. So after 5k of running in the heat, I did exactly that, threw off the runners and in I went. It was AMAZING. I stuck my head under the water, my body felt energised and corny as it may sound, I felt alive. I came back to the house with a grin on my face, soaking wet and told my husband and kids that I had found my new favourite thing!

Over the winter that followed, I kept looking up sea swimming on line and swimming lessons. I read about sea swimming clubs and there were so many people who swore by the benefits of swimming in the sea all year round. I started looking back on my swims in Tenby with so much affection, they were nearly taking on mythical status in my mind! I did a series of swimming lessons in my local swimming pool, and I did enjoy them because I finally started to learn the proper technique for breathing, which I had never seemed to grasp as a child. But then I came down with a bad ear infection which lead to vertigo. And maybe it was a coincidence that it happened while I was doing swimming lessons in the pool, but it certainly made me more cautious of going in the pool, as I have ongoing sinus/ear issues Anecdotally, a few people with sinus issues had told me that the pool didn’t suit them, but that sea swimming was the way to go.

Then, last year, we went to Spain on holidays, and again, I kept up my running routine, and just as I had in Tenby, I went for a dip after my runs. I’m happy to report that I enjoyed it just as much in Spain.

Which brings us to 2020, this most unusual of summers to say the least. I had pictured myself running in Italy on the beach, but it wasn’t to be. Instead it was Lahinch and Inishmór and as anyone who has read my blog about that holiday will know, I didn’t miss Italy! I had thought that running along Lahinch beach on a typical Irish “soft” summer day (not that hot, bit of sea mist), that I might not have been so inclined to run into the water afterwards. But the urge was still very much there and it was again magical!

When I go for a run followed by a dip in the sea like this, I really feel so set up for the day, I feel like I can take on the world and win, that there is nothing I can’t handle. And recently I always feel compelled to post about it and write about it! When I posted on Instagram about my swim in Lahinch, I got a message saying that there is a group in Spanish Point called Snamhaí Sásta who go for a dip every morning at 9am. I had heard of this group previously in passing, and when I read more about this group, it just sounds amazing. They are not focused on the swimming, it is more about camraderie, having fun and feeling part of a group. You can read more about this group here. https://www.independent.ie/life/you-leave-your-troubles-on-the-shoreline-when-you-get-into-the-sea-how-salt-water-swimming-heals-39384608.html

If I am nearby Spanish Point in the future, I will make it my business to join them.

Then just a few days ago, I turned on the TV to a documentary on RTE1 about Seán Boylan, the former Meath football Manager. I had missed the start of it, but this turned out to be a really fascinating programme. Sean Boylan is such an interesting man. As well as having managed Meath football team for twenty three years, he is also a traditional medical herbalist. He speaks in the documentary about the energy you would get from running near the hill of Tara. What really caught my attention was that one of the training routines he had for the Meath team was running in the sand dunes and on the beach and then, into the water! He speaks about the lads probably thinking he was mad, when he would go into the water after running. But he explained that it was very good for loosening tendons and great for blood vessels after exercise, because of what the turbulence in the sand and seas would release. He said it was great for energy. At last, I had an explanation for what I have been feeling when I go into the sea! Thank you Seán Boylan and well done RTE on such a good documentary.

Back in the real world, I live 30 minutes from Ballybunion beach. I adore Ballybunion beach, the cliffs, the clear ocean, the waves, all of it! I have been to Ballybunion more times this Summer than any other. Either with the wet suit on or not, I have gone into the water. I love it.  Just yesterday evening, my son had an evening football match in Ballybunion, at the end of a scorching hot day. We headed down to the beach after the match for a dip. The waves were huge! Parents and kids alike had so much fun, diving into the waves, getting knocked over by waves, swimming in the waves, pure childlike joy.

I find myself googling “houses for sale” in local seaside towns and (in a total imaginary world) looking for houses next to the sea or with a sea view. I picture myself waking in the morning, going for a run, a quick dip and then having a coffee on my (very imaginary) balcony overlooking the sea. And then writing my novel that I have talked about since I was a child! Plot as yet unknown!

I will keep dreaming, as what is life without dreams and imagination. In the meantime, if anyone sets up a swimming group similar to Snámhaí Sásta, but in North Kerry, be sure to tell me about it!!

All Updates
We use cookies on our website to give you the most relevant experience by remembering your preferences and repeat visits. By clicking “Accept”, you consent to the use of ALL the cookies.
Cookie settingsACCEPT
Manage consent

This website uses cookies to improve your experience while you navigate through the website. Out of these, the cookies that are categorized as necessary are stored on your browser as they are essential for the working of basic functionalities of the website. We also use third-party cookies that help us analyze and understand how you use this website. These cookies will be stored in your browser only with your consent. You also have the option to opt-out of these cookies. But opting out of some of these cookies may affect your browsing experience.
Necessary Always Enabled
Necessary cookies are absolutely essential for the website to function properly. This category only includes cookies that ensures basic functionalities and security features of the website. These cookies do not store any personal information.
Non-necessary
Any cookies that may not be particularly necessary for the website to function and is used specifically to collect user personal data via analytics, ads, other embedded contents are termed as non-necessary cookies. It is mandatory to procure user consent prior to running these cookies on your website.
SAVE & ACCEPT